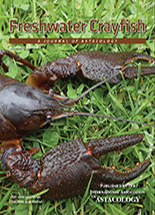 A study of growth and moulting rates of Astacopsis gouldi Clark

Astacopsis gouldi Clark is native to northern Tasmania, Australia, and is the world’s largest freshwater crayfish. Anecdotal reports exist of specimens attaining weights greater than 6 kg and rostral carapace lengths (CPL) in excess of 240 mm. This study complements earlier growth rate studies on the species, and uses data collected over the past 12 years on more than 400 specimens marked with tailfan clips from 1999, and subsequently Passive Integrated Transponder (PIT) tags since 2007. Captures of A. gouldi and recording of moulting events and growth in this study have provided an estimate of growth rates of recaptured specimens up to weights of 3 kg. The majority of adult A. gouldi moult at least biennially, with the exception of the very large animals >200 mm CPL. The results of this study suggest that a 190 mm CPL male A. gouldi is approximately 20 years of age. According to this model, the largest anecdotally recorded crayfish (weighing 6 kg) would correspond to approximately 265 mm CPL and 35 years of age.