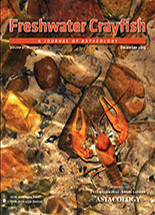 Cambarus chasmodactylus is restricted to the New River drainage of the Central Appalachians. Female crayfish display cyclic reproductive states, but the ecological implications of this cycle have yet to be assessed. Female C. chasmodactylus were collected from Anthony Creek, West Virginia during the summer months to investigate food habits. Stomach content frequencies were obtained for four broad categories. Food items were identified to the lowest taxonomic level applicable. Feeding spectra were used to assess the importance of prey items. Generalized linear models were used to assess the effects of season, body size, and reproductive state on broad food categories, amount of food consumed, and the frequency of the most abundant prey item. The most food was consumed during June and the least in August. Organic detritus was consumed most frequently and reached its highest frequency in late summer. Animal matter was consumed more frequently by larger animals. Snails were the most predominate animal ingested, showing lower frequencies in June and September in comparison to August and October. Results indicate New River crayfish are feeding generalists and food habits changed with season. There is indication that body size and reproductive state may have a direct or indirect link to food habits.